The store will not work correctly in the case when cookies are disabled.


It’s nearly upon us! We’re just weeks away from June 12th when FIFA 2014 World Cup kicks off in Brazil and for a whole month, football mania will sweep the UK. You simply can’t avoid it, unless you fly off to a remote island or cut all communication with the outside world and don’t leave your house. From TV adverts to supermarket shopping, World Cup branding is everywhere and you don’t need to be a genius to figure out why. Football has mass global appeal, young and old, male and female.

For businesses both large and small, the opportunity to be part of World Cup mania is too good to miss and we expect to see strong sales of promotional football products during the lead up to and during the World Cup.

One of the biggest brands to be involved with the World Cup is Adidas. We thought it would be interesting to take a look back to 1970 when Adidas first became FIFA Partner and FIFA World Cup Official Match Ball supplier and see how the ball has evolved over the years up until present day.

This graphic showcases how the ball has evolved over the years, from far left in 1970, to current day 2014 ball far right. 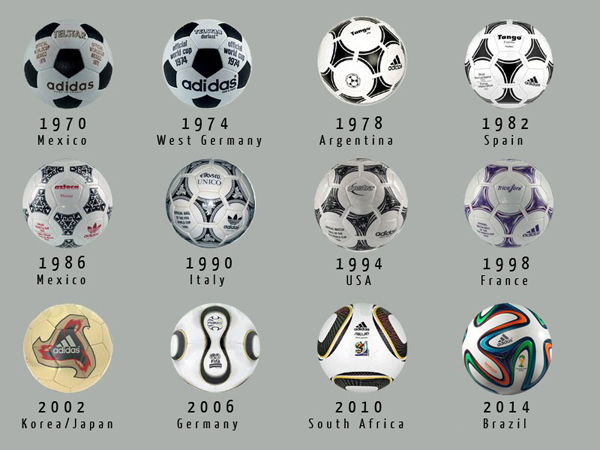 Here we look at those 12 footballs that Adidas have produced for each World Cup since 1970. It’s an amazing transformation the ball has undergone up to today’s ball - it seems being circular is the only similarity of the ball 34 years ago. 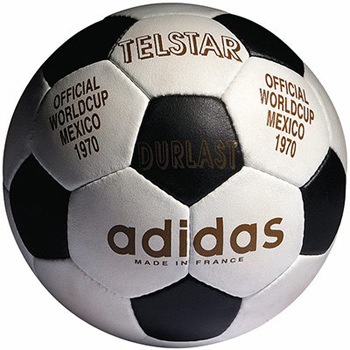 This was also the first ball used in the World Cup to use the Buckminster type of design with 32 black and white panels. 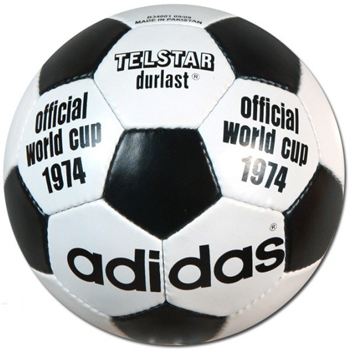 
The ball remained the same for the 1974 FIFA World Cup in Germany. The name Telstar is actually short for television star. 1974 was also the first time World Cup match balls could carry names and logos. 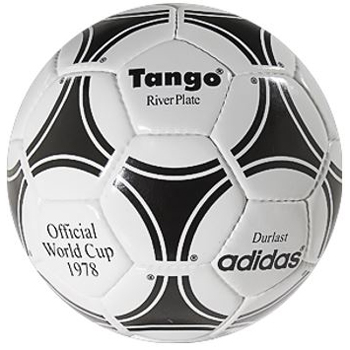 
Adidas Tango Durlast, the official match ball of the 1978 FIFA World Cup in Argentina. The match ball included 20 panels with triads that created an optical impression of 12 identical circles. The tango design was used for the next twenty years (five tournaments). At the time it was the most expensive ball in history at £50 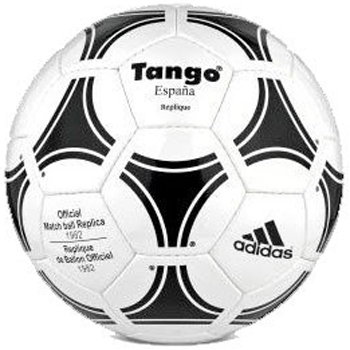 
Adidas Tango Espana, the official match ball of the 1982 FIFA World Cup in Spain. The ball boasted improved water resistant qualities but general wear from kicking however meant the rubber began to wear after a short time and needed to be replaced during the game.

This was the last genuine leather football to be used in the World Cup. 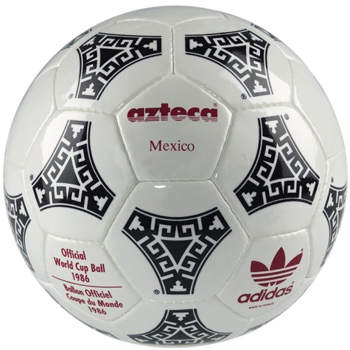 
Adidas Azteca, the official match ball for the 1986 World Cup in Mexico was the first fully synthetic World Cup ball - polyurethane coated which was rain-resistant. The design was inspired by Mexico's native Aztec architecture and murals 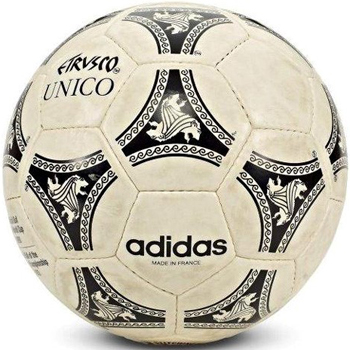 
Adidas Etrusco Unico, was the first ball with an internal layer of black polyurethane foam. The name and design paid homage to Italy’s history and the fine art of the Etruscans. 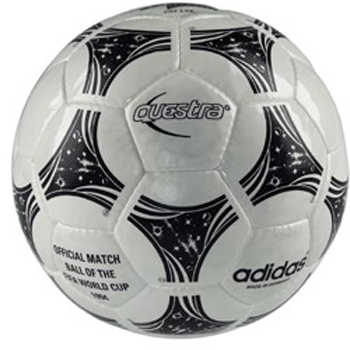 
Adidas Questra, the official match ball of the 1994 FIFA World Cup in the USA was enveloped in a layer of polystyrene foam. The ball was popular with strikers as it was made for speed and control however goalkeepers complained of the ball's unpredictability. 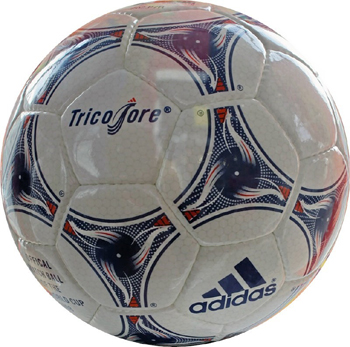 
Adidas Tricolore, the official match ball of the 1998 FIFA World Cup in France was the first ball to use colour in its design. The design of blue triads decorated with cockerel motifs represented the colours of the French flag.

Remember this amazing goal by Roberto Carlos for Brazil against France: 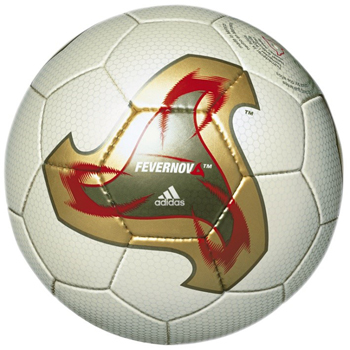 
This ball was notoriously criticised for being too light, yet some spectacular goals were scored with it during the tournament. The ball was also blamed for a number of upsets that happened in the knockout stages. Its styling marked a departure from the traditional Tango ball design.

England’s 2002 World Cup goalkeeper David Seaman would probably be the first to try and blame this following goal on the balls ‘unpredictability’ and spare his embarrassment! 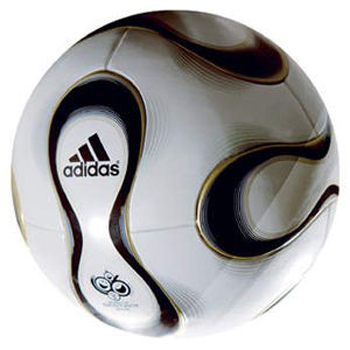 
In terms of the design of this World Cup ball, a radically new configuration reduced the amount of panel touch points forming a smooth and perfectly round exterior that improved accuracy and control. The ball was claimed to be the roundest football ever made. Prior to this ball, the surface of World Cup match balls had notable differences depending on where a player would strike the ball due to seams, ridges and other imperfections where panels come together. The revolutionary propeller design of the Teamgeist minimized corners and created a smoother surface for improved play. The ball was designed with traditional colors of the German flag and was accentuated with the golden color of the World Cup trophy.

The plus sign in its name was introduced for trademark purposes, since the regular German word Teamgeist, meaning "team spirit", could not be trademarked. 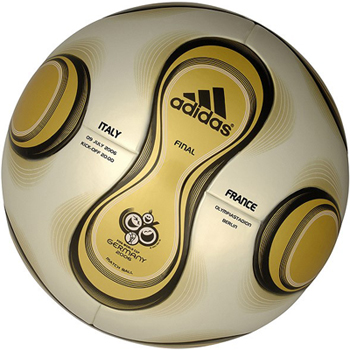 A special edition gold Adidas Teamgeist was created
for the 2006 FIFA World Cup final between Italy and France. 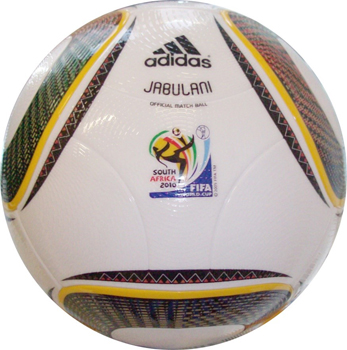 
The World Cup 2010 in South Africa was famous for the vuvuzela and ball controversy. Adidas receive lots of criticism from players and coaches who said that the path of the ball through the air was unpredictable.

The ball was called 'Jabulani', an isiZulu term meaning "to celebrate" and was made from 8 spherically moulded panels and has a textured surface Adidas called "Grip 'n' Groove" intended to improve aerodynamics. However, just like the 2002 football, players did not like it. 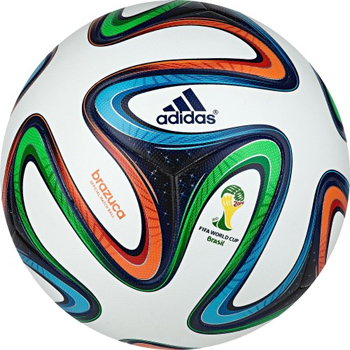 
Adidas will surely be hoping this summers World Cup ball will not face the scrutiny like some of the previous balls they’ve produced. The 2014 ball called ‘Brazuca’ is reported to have been the most tested Adidas football of all time. Adidas have spent 36 months testing the Brazuca ball. They worked with 600 players in 30 different teams across 10 countries including the World’s best players Lionel Messi and Christiano Ronaldo. So, if any football players this summer don’t like the ball, they can blame each other!

Why is it called Brazuca? Well, Brazuca is an informal local term that means ‘Brazilian’ or describes the Brazilian way of life. The colours and ribbon design of the ball panels symbolise the traditional multi-coloured wish bracelets worn in the country.

If you want to get your hands on one of these Adidas Brazuca balls they will set you back £100 for an official match ball, £10 for a mini ball or £20 for a replica ball.

Finally, remember the vuvuzela instrumets from the last World Cup in South Africa? Well, this World Cup in Brazil will see an instrument called the Caxixi take centre stage and make all the noise. The Caxixi is used by shaking and will no doubt be very popular promotional products this summer. You can get your branded Caxixi here. We tested them out and love them, check out our video here: